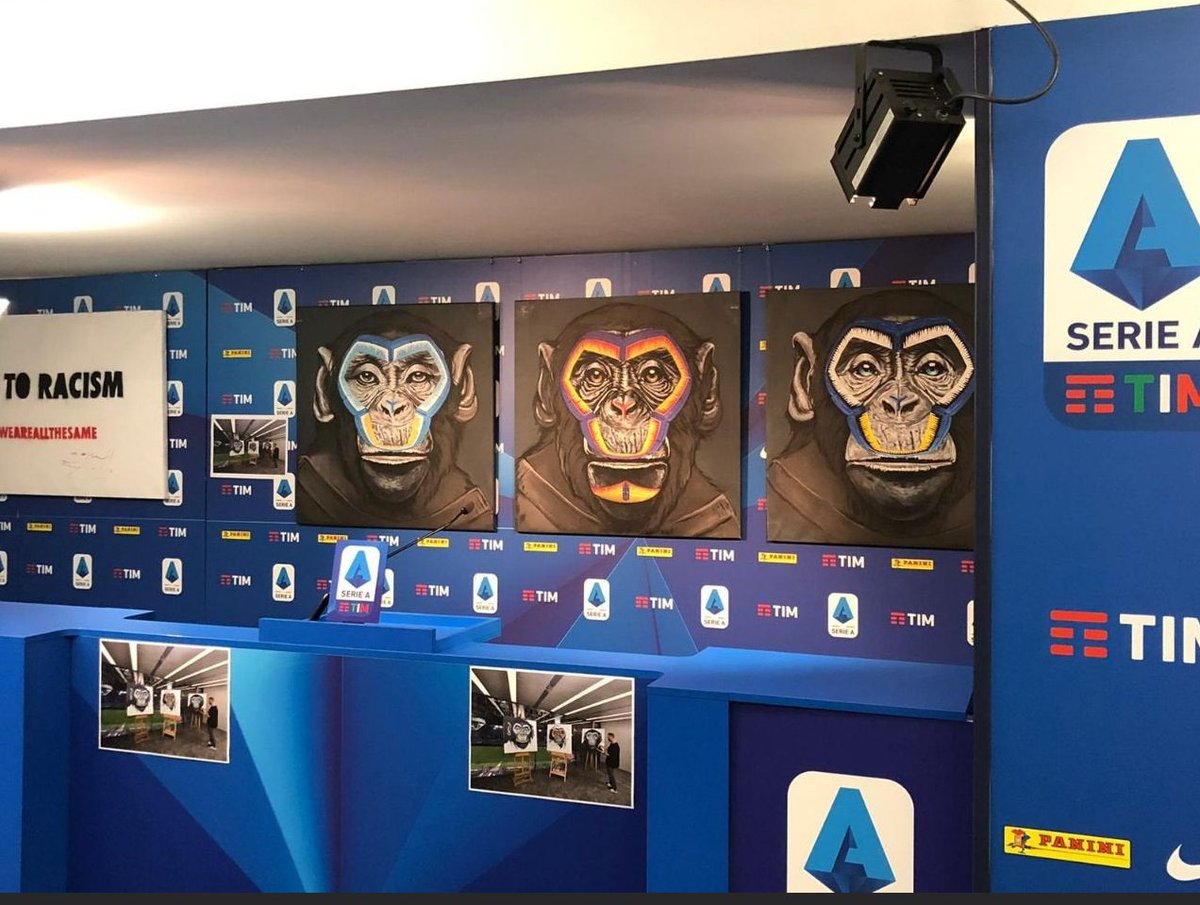 Italian artist Simone Fugazzotto, who designed an anti-racism artwork featuring three side-by-side paintings of apes that was presented by Italian football league Serie A, poses for a photograph in Milan December 17, 2019. "My paintings fully reflect the values of fair play and tolerance".

On Tuesday, De Siervo accepted the campaign choice had not made the intended impact.

"We will do in two years what (former British Prime Minister Margaret) Thatcher did in 10", said De Siervo, referring to the battle against vandalism in the English stadiums in the 1980s.

"What is absolutely not to question is the severe condemnation of all kinds of discrimination and racism, phenomena that we are committed to eradicate from our championship", defended De Servio.

The controversial art was part of the league's anti-racism programme presented in Milan, which included the signing of a charter by a player representing each of the 20 Serie A clubs.

Milan said they "strongly disagree" with the use of monkeys, while Roma expressed their "surprise", adding: "We understand the league wants to tackle racism but we don't believe this is the right way to do it".

I expresses honest apologies for the artwork that was presented yesterday, I realised it was inappropriate.

Those behind the campaign were accused of insensitivity by social media users given the continued incidents of black footballers being subjected to monkey chants as a form of racial abuse.

Fare, a football supporters network formed in Vienna, Austria, to counter discrimination in European football, said the "Monkeys" poster left them speechless. "In a country in which the authorities fail to deal with racism week after week Serie A have launched a campaign that looks like a sick joke".

Roma also said it "was very surprised" by the move.

Newspaper Corriere dello Sport also caused controversy last month by building up to Roma's match against Inter using an image of Lukaku and Chris Smalling on the front page with the headline "Black Friday".

"This is why I painted three monkeys: a western monkey with blue eyes, an Asian with almond eyes and a black one with a face inscribed in a soccer ball".

"I've always been painting monkeys for five to six years, so I thought I'd make this work to teach that we're all apes".

The league's decision to permanently install the paintings in their main base of operations has not been hugely well received, however, with players such as Romelu Lukaku and Kalidou Koulibaly having previously been targeted with monkey chants from racist fans.

Reports say the Chiefs add former Pro Bowler Terrell Suggs
Demone Harris , who was recently signed to the active roster from the Ravens' practice squad, also logged 27 snaps in his absence. He needs two more sacks to pass Jason Taylor for seventh most since sacks became an official stat in 1982.

Blessings Performed Before Operation to Recover Bodies From White Island Volcano
Its alert level since late Monday had been 3 on a scale where 5 signifies a major eruption. Many were passengers aboard the Royal Caribbean cruise ship Ovation of the Seas.