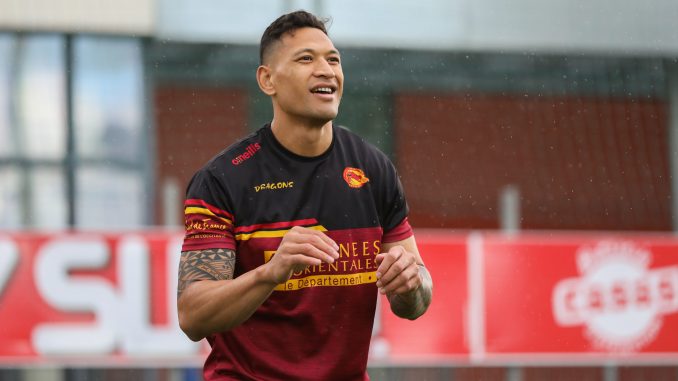 The decision comes after a Super League board meeting in Salford, England, on Wednesday (local time) where Folau was the focus of conversation.

Dragons chairman Bernard Guasch has said they wanted to give Folau a "new opportunity" but the club did not share the player's religious beliefs.

Folau, 30, is returning to rugby league after 10 years away from the sport, during which time he played Aussie rules and rugby union, becoming a high-profile Australia worldwide in the latter sport.

Super League executive chairman Robert Elstone said the league "deplores the homophobic comments Israel Folau has made in the past", but the move was ratified by the Rugby Football League (RFL).

The Dragons had meant to hold a press conference to unveil Folau but instead opted to conduct their own in-house interview.

This happened although Guasch was asked to participate by the other Super League clubs and Folau had the main topic on the agenda.

Folau, a devout Christian, was sacked in May by Rugby Australia over a social media post warning "hell awaits" gay people.

Outlining the circumstances in which that might happen, the Hull KR chairman added: "For example, if title sponsor withdraws, or external investment is not secured, or quantifiable reputational damage is caused to the brand of Super League and its members".

"As a sport, we have an impressive and enviable track record of equality, diversity and inclusion and we will continue to do our great work in these areas".

The BBC are now reporting that Hull KR are fronting a revolt against Folau playing in Super League, led by club owner Neil Hugdell.

Rugby Australia and Israel Folau have agreed to settle following mediation with the governing body apologising to Folau.

Folau, the Perpignan-based club said, "is fit", but lacking game time as he has not played since his suspension.

"It's been 10 years since I last played rugby league and I'm grateful for the opportunity to be part of a great organisation, great team", he said.

"I miss that team camaraderie, the team environment and being around teammates", he said.

"I look forward to my return to the great game of rugby league with the Catalans Dragons".

In addition, the RFL said it did not have the "regulatory framework" to stop Folau from joining Catalans and as such could not "prevent his participation in the sport".